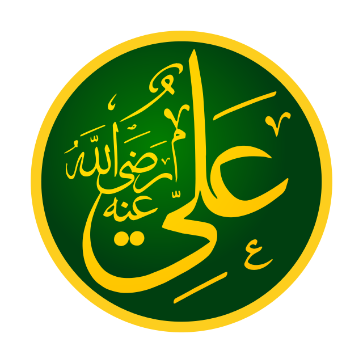 WHO ?
Shia Is a branch of Islam which holds that the Islamic prophet Muhammad designated Ali ibn Abi Talib as his successor (Imam). Shia Islam primarily contrasts with Sunni Islam, whose adherents believe that Muhammad did not appoint a successor. Instead they consider Abu Bakr (who was appointed Caliph through a Shura,consensus) to be the correct Caliph. 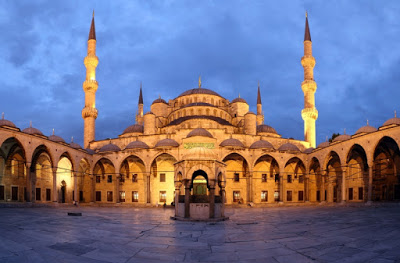 Shia Muslims believe that just as a prophet is appointed by God alone, only God has the prerogative to appoint the successor to his prophet.
They believe God chose Ali to be Muhammad’s successor, infallible, the first caliph (khalifa, head of state) of Islam. The Shias believe that Muhammad designated Ali as his successor by God’s command.
Ali became caliph in 656 and ruled only five years before he was assassinated. The caliphate, which was based in the Arabian Peninsula, passed to the Umayyad dynasty in Damascus and later the Abbasids in Baghdad. 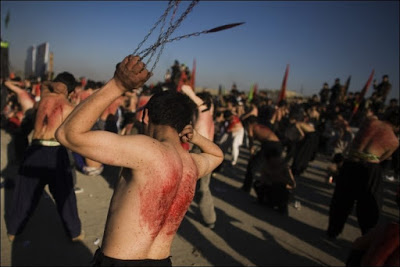 Shias rejected the authority of these rulers. In 680, soldiers of the second Umayyad caliph killed Ali’s son, Husayn, and many of his companions in Karbala, located in modern-day Iraq.

WHY ?
Sunni and Shi’a Islam have manifested themselves in significant forms of terrorism since the year of 1979.
Beginning in that year, the Islamic Revolution swept Iran and sent shock waves across the entire Muslim world and beyond. It also helped unleash a series of political, social and military forces that transformed the landscape across the wider muslim world and inspired subsequent Islamic fundamentalists and extremists. Radical Islam emerged as a violent political movement. Many Muslims perceived it as the worthy successor to the heavily discredited ideologies popular especially in the aftermath of World War II, including Arab nationalism and communism, both of which were tapped to eradicate western colonialism and relieve the political and economic frustrations of tens of millions across the wider Islamic world. 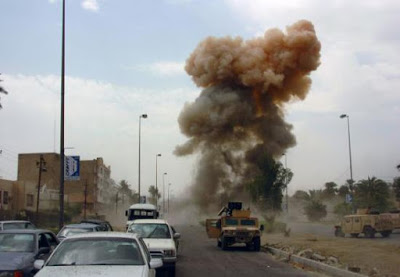 HOW ?
The pattern of terrorism by Shi’a groups outside of combat zones featured a low‐ profile campaign targeting only the most vulnerable American military and diplomatic locations across the Middle East and South Asia.
While tactics being used in the Iraqi combat zone might be featured in such a campaign, the conditions in countries other than Iraq and Afghanistan suggest strongly that Iran and Hezbollah will instead opt for historic non‐combat zone tactics, making certain that every bit of their thirty‐year experience with terror in vulnerable, under‐ protected venues comes into play. The five campaigns of Shi’a group terror have each been designed to achieve a specific policy objective approved by the clerical leadership in Iran, or in coordination between Iranian agents and elements with Hezbollah and the Government of Syria. Shi’a terrorism largely emanated from threats perceived as regime threatening and proximate to Tehran or to Hezbollah’s seats of power. 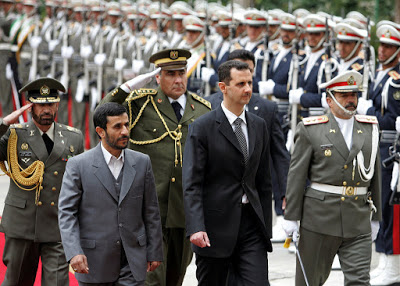 1.  The first campaign was to secure the notion of a Shi’a Islamic movement itself
2.  The second to safeguard the Shi’a state of Iran from counter‐coup.
3.  The third campaign neutralized the most overt supporter of Saddam’s threat to Tehran and the Druze threat to Hezbollah.
4.  The fourth campaign struck at innocents in Argentina in a retaliatory manner that showed how vulnerable Hezbollah’s leadership felt to an Israeli targeted assassination and abduction campaign.
5.  Finally, from 1996 through 2006, the pattern of terrorism by Shi’a groups outside of combat zones featured a low‐profile campaign targeting only the most vulnerable and diplomatic locations across the Middle East and South Asia
Shi’a group attacks, which are tied to discrete Iranian and Hezbollah policy objectives and when these objectives are reached, have been most common in the Levant with almost one hundred attacks, principally in Lebanon. This is followed by far fewer attacks in Europe—less than thirty—and then North Africa and Egypt, with eleven.
Shi’a terrorists show a propensity toward abduction and kidnapping of those who can provide them significant news coverage, and from whom they can extract significant ransom and concessions. 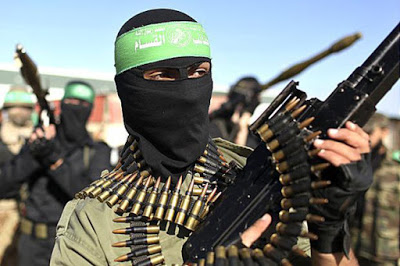 Hezbollah was the first to use suicide bombings as a tactic for Islamist terrorism beginning with attacks against U.S. and French targets in Beirut during 1983, ultimately carrying out at least thirty‐six suicide attacks within Lebanon in the 1980s. The group continued to use the technique against Israel in the 1990s. Iran also made use of a variant of this tactic from 1982 through 1988, employing suicide combatants in waves during its grueling war against Iraq. Thus, it is clear that terrorism by Shi’a actors may feature suicide operations when the tactic is feasible. However, suicide operations by Shi’a terrorist groups in non‐combat zones have been somewhat subdued over the past decade‐and‐a‐half, and principally focused against Israel.
CONCLUSIONS
While western policymakers may not be acutely aware of this success rate, they should be clear that Iranian and Hezbollah leaders are able to make future decisions regarding the use of terrorism to achieve political objectives from a perspective of high confidence. Shi’a theology or doctrine. It is motivated by distinct policy objectives and features discrete start and endpoints linked to achieving purposeful political objectives. Moreover, it will use an array of techniques from suicide bombings to kidnapping to targeted assassinations to achieve success.
Shi’a terrorists are better understood as operating among Shi’a Muslims who remain generally oblivious to the terrorists’ goals and activities. This is true for several reasons. 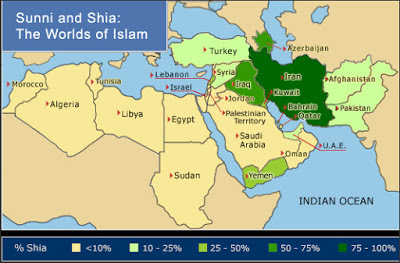 Shi’a Muslims are fewer than there are Sunni Muslims. Worldwide, some 1.3 billion Sunni Muslims dwarf an estimated 280 million Shi’a Muslims. Only five countries (Iran, Iraq, Lebanon, Bahrain and Azerbaijan) have more self‐identified Shi’a than Sunnis.
Shi’a terrorism shows a propensity toward individual, targeted killings of specific people with a calibrated eye toward minimizing collateral damage to surrounding individuals and property.
CHALLENGES
The Shia revival constitutes the most powerful resistance and challenge to Sunni extremism and jihadi activism within the region. Shia revival is an anti-Wahhbi and antiextremist force.
Its objectives are served by change in the regional balance of power and democracy.
In turn, democracy will unleash the full extend of the Shia challenge to Sunni extremism.
Democracy will bring to power Shia majorities and give greater voice to Shia minorities, whose ideology and politics diverge from the extremist bent of Sunni radicalism. 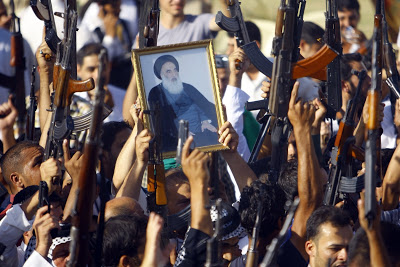 OVERVIEW
1.  Sunni radicals and Shi’a extremists differ in the overall approach and main objectives for their use of terror.
The former tend to operate in a continuous, mid‐to‐high intensity manner, seeing war against infidels and apostates as a perennial condition featuring overlapping waves.
Outside of an ongoing and seemingly open‐ended campaign against Israel, terrorist attacks by Shi’a groups have by and large featured discrete terror campaigns tethered to state and organizational objectives.
2.   Sunni terrorists and Shi’a extremists manifest different patterns for recruiting terrorist operatives and developing terrorist missions.
Shi’a terrorists, unlike their Sunni counterparts, enjoy direct state support and for that reason are far more likely to originate from Iranian embassies, consulates and state‐run businesses.
3.   Despite holding a minority viewpoint within the wider Sunni Islamic community, Sunni extremists, especially Salafi‐Jihadis, rely more extensively on the support of their coreligionist expatriate communities in facilitating terrorist activities.
4.   While employing similar tactics and methods, Shi’a terrorist groups have shown a much greater propensity to kidnap innocents to barter, while Sunni extremists more frequently abduct to kill.
5.   Shi’a terror groups exhibit a much higher incidence of targeted assassinations for specific political gain, rather than the high‐casualty killings featured in Sunni terrorism, and particularly of the Salafi‐Jihadist variant.
6.   Each sect’s extremists manage publicity and propaganda differently. The Sunni approach to information management tends to feature doctrine and resources geared to take immediate credit and widely amplify a terrorist event. Shi’a terrorists, while not averse to normal media publicity and amplification, by and large take a much lower‐key approach.