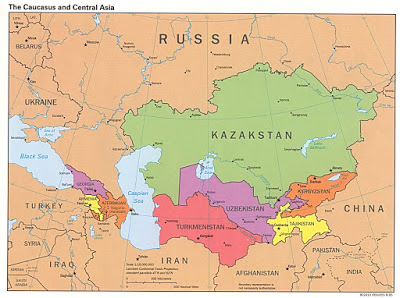 Turkmenistan today covers the territory that was at the crossroads of ancient civilizations, which in 1924 became a Soviet republic and gained its independence in 1991.
Extensive hydrocarbon reserves, that have not been fully explored yet, are beginning to draw attention to the country.
Nowadays Turkmenistan is steadily transforming and expanding its mining projects and gas delivery.
The Turkmen government is actively working to diversify its gas export routes  beyond the Russian pipeline network.
In 2010, a new  gas exporting pipeline carrying Turkmen gas to China and northern Iran became operational, and that finally ends Russian monopoly on gas exports.
Saparmurat Niyazov, the president that was elected for life, died in 2006.
His successor,after the February 2007 elections, is Gurbanguly Berdimuhamedow, who was reelected in 2012 and 2017, but OSCE accused the lack of freedom needed to create a competitive environment for elections.
The emergence of the new states in Central Asia, following the breakup of the Soviet Union, have drastically changed the politics of the region, which became the scene of major geopolitical confrontations.
In accordance with the new realities, the states in the region have begun to seek out new identities, to establish the priorities of foreign policy, to secure a credible place in the regional security system and to define their place and role within the international relations system.[1]
The last decade, in general terms, has shaped a controlled internal policy and development model for states in the region, who have already made their choices, but the main task – establishing foreign policy priorities, and ensuring a believable system of security, has not yet been addressed yet.
None of the attempts made in the Community of Independent Turkmenistan, Member States of CIS, the Central Asia Union, the Shanghai Cooperation Organisation (SCO) and other vehicles of integration, in order to put a system of regional security in place, which would ensure the stability of the military-political and socio-economic situation of the region, have not yet produced a result yet.
It is quite unlikely that a result will be achieved in the near future.
The main reasons for this are:
-competitive economic potential of states in the region,
-competitive tactics and strategies for achieving their exclusive and mutual economic prosperity
This, to a large extent, is propelling states of the region towards an independent search for business and political foreign partners.
They ignore their interest in regional geopolitical unification and the importance of concerted efforts on issues such as regional security.
Moreover, there are differences between them, in their assessments of security threats, with all the consequences arising therefrom.
An assumed example is Turkmenistan with its policy of “positive neutrality” [2],which manifests itself in distancing, sometimes even completely isolating itself from other Central Asian countries.
[1] http://www2.geog.uni-heidelberg.de/anthropo/mitarbeiter/schmid/pdf/turkmenistan.pdf
[2] http://sam.gov.tr/wp-content/uploads/2012/01/BORIS-O.-SHIKHMURADOV.pdf